1918 – Brother against Brother is a card driven wargame for two players that takes place during Finnish Civil war. One player is in charge of the senate led White forces while other player tries to led Revolutionary Reds led by People’s Delegation to victory.

Game has more than fifty unique cards that depict historical events. Each card has game description as well as short historical text and photograph connected to it. Gameboard has Finnish map from 1918 in it, where towns and roads and railroads connecting them has been marked. 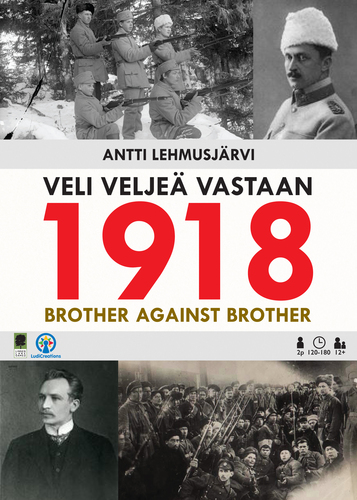 The game had a successful Kickstarter campaign. If you missed it you can now order a copy of the game for 59 euros plus shipping costs. Send us an email to info@lindenlakegames.com if you are interested.

You can find the page of now ended campaign here.

You can order the game here.

You can download the latest version of the English rules here.

1918 – Brother against Brother on BoardGameGeek.